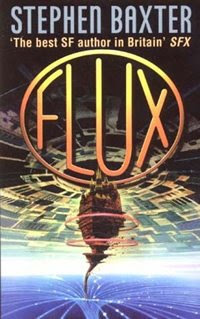 Flux, by Stephen Baxter was a reasonably good read.

Although the initial pages seemed to me to set up a trajectory for the book that it did not really end up going in, it was still a reasonably interesting story.

What I found interesting, on reflection, was the illustration of a previous post of mine that there really is no such thing as hard Science Fiction. Or, to put it another way.

Baxter does a very good job of building a world inside a sun. He works very hard at making plausible explanations of how a living being might operate in that environment. There are a few dissonances that are resolved in a satisfying way. For example references to the metric units are quite clever. And, although I have not the knowledge to know whether the atomic effects he describes are valid or not, and suspect there would be unmentioned factors that make his creation unstable, nonetheless his world building is convincing. That's all it takes.

A good plot, interesting characters and a convincing world is all it takes.

However, trying not to give too much away, at the end of the book Baxter does resort to the Deux ex Machina. He does it well, and we have the hints and introductions earlier in the book so that it is not surprising and not discordant. But the last couple of chapters do resort to Wizard of Oz science fiction. The descriptions of mechanics and theory are abandoned and the science is minimised in favour of plot. How does this character's manipulations influence the world? How does the great big machine work?

We are not told, because, basically, at this point the vision of the science fiction writer is beyond the science to describe.

I think that's true of all science fiction. The fiction always leaves the science behind. And rightly so. The science is the servant of the fiction.

A good read, with some novel ideas.

Seven Suns out of Ten
Posted by Michael at 9:43 am