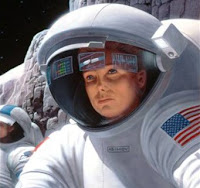 Civil liberties groups are protesting the inclusion of a Oxygen Levy, or Air Tax, in the Australian Government's recent federal budget.

Buried in the fine print the levy has been largely unnoticed until now.

Margot Leifft of the Citizens Rights Coalition says, "It's only a small percentage now but it opens the door to further increases. Free air is an inalienable right."

The federal Treasurer disagrees, "A responsible government will tax the carbon a citizen puts into the atmosphere and a legitimate government can tax the oxygen you take out."

The coalition is researching to take a case to the supreme court, but it seems to be a long shot.
"There is nothing in the constitution, no case, no precedent. We've been right through the UN's declaration of human rights, and at the moment we can't find it clearly stated."

"What is clear is that the current laws were not framed with an oxygen levy in mind," he said in an issues paper released yesterday.

Tell me this is isn't the same logic

Note that only 50 years ago the majority of boys were circumcised, surely the conclusion must be that the law rests on the assumption of the complete and utter legality of circumcision.

You will find the same underhand argument in the case of the ordination of homosexual ministers in the Uniting church in Australia and the redefinition of Marriage to include homosexual etc unions.

What was common territory and universally assumed was not spoken of, hence a bit of fancy footwork can paint it as an area of doubt, or a grey area for interpretation.

Be honest and just say, "We want to change everything."
Posted by Michael at 11:04 am