Stooping From The Shoulders of Giants 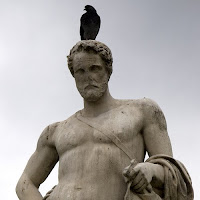 Listening to the news in the car this afternoon I had two observations about the G20 protesters.

How do protesters get to their protests? Why were there international protesters at the Sydney Summit? How long before the summit did they have to leave on their bark canoes in order to not be part of the global airline network?

I don't like global free trade. I think the little countries are always going to get pushed around by the big countries. But globalisation just is. Television, fibre optics, Internet, satellites these are the things that have made the world "globalised" These will not be wound back by protests. The protesters are completely missing the point, they need to protest outside every home that has Internet, every home that has a television, every city that has an airport.

There is something fundamentally myopic (more blind and stupid than hypocritical) about anti globalisation protesters who catch planes, trains, buses and taxis to protests and use the Internet to organise their protests.

Stooping from the shoulders of giants.

Banks make a whole lot of things possible for a whole lot of ordinary people. One could argue that without the banks the middle class would not exist and the gap between rich and poor would be even greater. Where do you live for the twenty years it takes you to save the $350,000 under your mattress to buy your first home?

If you just remember banks are a business and are trying to make money out of their financial services you'll do fine. If you don't like banks, you should try some of the non bank lenders. banks like to make their money out of people paying off their home loan. Some other lenders are happy to make a living selling people out of their homes. In finance, by and large, the banks are the nice guys.

The protesters, who live somewhere, and utilise infrastructure, services and business all built on bank credit are like rich wastrels living of the inheritance. The enviro-protester lifestyle is made possible by the foundation of work and build over centuries with the cooperation of the financial sector.

Sure things have got financially wobbly lately. But don't forget that's as much because of the greed of the ordinary family as the greed of the banks. Our society is like the protesters. Living off the rich heritage of ethics, community, character and world view build up by generations of Christian civilisation. But like the protesters, ignorantly chipping away at the foundations as quickly as possible and simultaneously wondering why the system doesn't work like it used to.
Posted by Michael at 6:21 pm