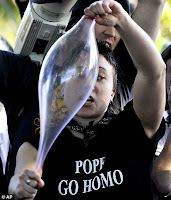 Cultural Imperialism is the accusation often thrown at the missionaries of days gone by.

Today's cultural imperialism, driven by economic imperialism and justified by blind idealism is a rapacious beast devouring millions of lives.

Now there are plenty of things I would take the pope to task over if I were to have a quiet chat with him in the back room. But I would try to get the facts straight. Our secular imperialists don't have to worry about that.

But how can this be?

Condoms are a western based solution to the problem of aids. They require reliable infrastructure and a good economy, a reasonable education level, willingness of the participants to use condoms and the effectiveness of the condoms themselves in stopping disease transmission. How many of these exist in Africa? The last two are in doubt even in Western countries.

Because it is not about Africa. This issue is not about legitimate concern for the Africans dying of AIDS. This is what it's about:

"About 60 members of gay and lesbian groups staged an anti-Pope demonstration outside the Fourviere basilica in Lyon as the congregation arrived for Sunday mass given by the archbishop of Lyon, Philippe Barbarin. "

This issue is really about the secularist/liberal agenda at home in Western countries.

If it were about the plight of the Africans a little research would force the agitators to support the abstinence based programs. No, this issue is just another gob of mud to throw at the religious bulwark.

It's just a shame the facts won't back up the hype.

PS: a quick look at the level of critique and the research that goes into understanding the pope's comments and countering them logically.

The actual comment:
"He said on a plane taking him to Cameroon that AIDS "cannot be overcome through the distribution of condoms, which even aggravates the problems."

He didn't say don't use them, he said the program doesn't work. It's like taking the neighbour who pointed out the horse is dead up before the RSPCA for cruelty.
Posted by Michael at 10:05 am