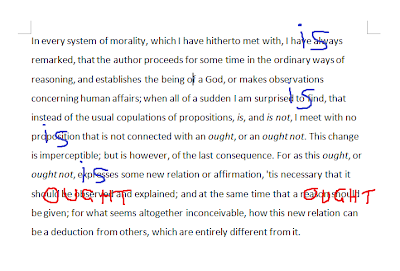 Because of length limits, I am breaking this comment down.

That's a nice try about Hume's own position, but you are blurring and extending the idea of "ought", using it in different ways at different points. This gives rise, or can give rise, to a fallacy of the sort found in "zero is nothing, a vacuum is nothing, therefore zero is a vacuum" - there, from using "nothing" differently at different points. Perhaps it would be clearer if you consider three usages in Latin which make the gradations clearer:-

- Te decet ... [to do something], "It is fitting that you ..." [do something]. It's up to you, but there will be consequences relating to you whichever you choose. It's that kind of "ought".

- A gerundive construction, as in the famous Carthago delenda est, "Carthage must be destroyed". This "must" is a sort of statement of cosmic necessity, not a genuine "ought" at all, and morality doesn't really come into it, any more than when saying "any non-negative integer must be the sum of no more than four squares". You can often rework these to use "is", too, e.g. "any non-negative integer is the sum of no more than four squares". When Cato said that about Carthage, he was working on just precisely an "is/ought" switch, only from "ought" to "is", to make it a done deal in Roman minds.

Also, though this is less important, you are using "is" too broadly too, as though it covered all uses of auxiliary verbs (though, unlike "is/ought", this can often be remedied by reworking the wording so "is" fits). Looking at which auxiliary verbs fit where, more broadly than just the two "is/ought", may provide broader insight.

Here is my take on Hume's wording, with my remarks noted in square brackets:-

"In every system of morality, which I have hitherto met with, I have always[1] remarked, that the author proceeds for some time in the ordinary ways of reasoning, and establishes the being of a God, or makes observations concerning human affairs; when all of a sudden I am surprised[2] to find, that instead of the usual copulations of propositions, is, and is not, I meet with no proposition[3] that is not connected with an ought, or an ought not. This change is imperceptible; but is however, of the last consequence. For as this ought, or ought not, expresses[3] some new relation or affirmation, 'tis necessary that it should[4] be observed and explained; and at the same time that a reason should[4] be given; for what seems altogether inconceivable, how this new relation can be a deduction from others, which are entirely different from it."

I would break this down thus, not quite as you do:-

[3] These are "does"es, not "is"es, but are curable as described above.

[4] These are cosmic "must"s, like the Latin gerundive construction, not (moral) "ought"s. Hume isn't saying you (or anybody) "ought" to do these things, he is saying "a proper proof (cosmically) must have these" - "to meet the conditions of being a proper proof, these must be/are present".

Note that in [4] I used the word "proper", which itself infolves notions of fitness and worthiness; to have avoided circularity and question begging, I (cosmically) ought to have used "complete", "rigorous", or something like that. Using it serves as a lead in to a special case: one may have an "is" that makes a statement about an "ought", e.g. "you ought to join up now we are at war" can be reworked as "you are a true patriot; true patriots join up now we are at war, so you are going to join up". But this is moving the subject matter into the definitions of true patriot, and analysis and testing take place there; it is not the pattern of switching argument that Hume was describing.

To my mind, it is more appropriate (fitting/ought?) to apply a different philosophy reflexively to itself: is utilitarianism useful? Now that utilitarianism has been tried sufficiently, I believe the evidence is against it.

P.M.
Thanks for your thoughtful response.
As I read your careful and learned thoughts I began to wonder if I did indeed do Hume a disservice in my short and somewhat flippant piece.

But as I reflect I think, no, my point still stands.

Not just because Hume is often used generically, "You can't get from an is to an ought."

My point, perhaps poorly put, is that whenever someone goes from an is to an ought they bring something else to the table. Many make an observation, then speak about what ought to happen, because their morals or their faith shape the ought. I believe this is what Hume was trying to point out, and I believe this is where Hume's law is most useful. It makes us see what else we bring to the table.

So in the ultimate sense there is no difference between your te decet and debes. They both bring something to the table. By what measure is something a cosmic necessity? By your understanding of what the cosmos should be. The big question is, where do you get that cosmic necessity and how do you justify it to someone else who doesn't share it.

Hume brings his own values to this law. Read him again, he makes observations, "I notice this, I read that." Then he says (in English), "tis necessary that it should..." There is an external value in that 'necessary'.

My question of Hume is, "What makes it necessary?" - Hume's values (or perhaps his doubts)

My question of you is, "What makes a cosmic necessity more supportable than a cosmetic necessity?" Is it not our own values, each of us, that make us accept one ought and reject another.

So my point remains, we all have axioms that we sometimes can see, sometimes cannot. These axioms shape us and our values, even our logic, yet when pushed we find it hard to defend them to anyone who doesn't share them.

But thanks, a very thoughtful and interesting discussion. Please feel free to keep it going. I enjoy civil and thoughtful interaction.