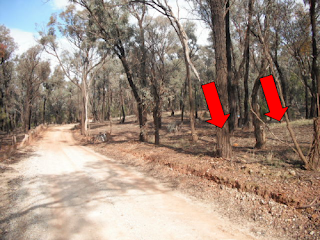 Probably about 5km down Moroney's lane from Temora, just after a rocky outcrop where the road narrows in the scrub as the hillside steepens there are two rubbish tips in what are probably two old mine diggings. Lots of wire and steel, a few bottles from about 50's or 60's and some broken bottles from approx 1920's.

Kevin Webb and I had a dig and excavated one pit and half of the other. The best find was two O.T. bottles, also a Reschs bottle with the Lion from about 1920's.

O.T. Registered
Refilling by Others
Is Illegal

This Bottle is
The Property of O.T. Limited
Australia
& London
1920's with beautiful picture of a chilli. Apparently a chilli fruit punch used as a mixer. The Maharaja's secret recipe, would you believe.


Later I went back and completed the dig and found a few more nondescript bottles from about 1920's and some bottles with trademarks and brand names from a later vintage.
Posted by Michael at 4:36 pm